“The only emotion that does not deceive is anxiety”

Anxiety has roots in the author’s own experience. He had to compete with negative emotions, which was after the discussion with the therapist revealed as anxiety. Deeper understanding came with writing about it and meeting others who suffered similar problems. Later he found out that texts are just one of methods to fight these emotional states. It resulted in an installation combining painting, objects and a video.

The theme was grasped through the method of mapping.. Autor says: “Maps are representations of a surface. They are showing relations between places, landscapes and objects. There you can see a forest and this street has a library at its end. Objects and their limits: surface and its texture – piercing abstract space. Outer maps have their inner cousins, exploring relations between thoughts, feelings and emotions. But the body consist of both types of maps (relations). And do we “draw” these kind of maps, resting between emotion and its surfaces, between visible and invisible, inner and outer? I would like to call a method which works with it mental kartography. “There is a newborn thought on my arm and piece of a dream behind ur ear. ” Surface is a representation of a depth, as branch imprints roots.”

I don’t remember the Sun ever-rising, yet it doesn’t seem it will set any time soon.
I feel a kind of relationship between us, I feel the mutual influence and instability of our dynamics in the longest of all days. The changeless scenery brings unrest alive, and I can’t help but think that I, in my solitude, might be the cause of it all.

I’m burning my sight looking at the Sun and reflecting on our silent dialogue. One loner to another. While I rush here and there in an effort to find where I belong, my companion remains motionless in one place that doesn’t even seem to be their home. Are they stubborn or have they just resigned?

The intimacy of mutual misunderstanding becomes a mirror of myself. Am I really looking for my place? Do I want to belong? Somewhere? To someone? To something? To include me in the unambiguous structures of your being?

Do neural networks dream? If computers perceive their own history, what would remain in their memory? Visual essay oscilates between iconical images and memory of a medium, whose DNA contains Muybridge, Duchampa and Turing. It creates an intuitive space of mechanical and organic entanglement. Feelings overlaps into computable operations in the world of machines and men.

First lockdown I was spending alone at home, looking through windows, observing little changes. Video was exhibited as part of an exhibition in display cases (everything was closed) at letna.

Visuals are combination of “things from the archive of the internet” and old book which one homeless guy brought into a small bookshop in Prague (Holešovice). The book is full of pictures of deed coral reefs shells and bodies of ocean animals, which were at the moment when the book was published (its almost 100 years) representations of beauty, but now it is rather representation of a melancholy of vanishing world. This book was given to me at one of the night visits of this bookshop where u have a beer and in collaboration with Alex Banks It gained new life. Siren Call’ is from the Tephra EP out now on Max Cooper’s Mesh label https://meshmeshmesh.net/ https://www.alexbanksmusic.co.uk/ https://www.facebook.com/alexbanksmusic https://www.instagram.com/alexbanksmu…

In Summer I was happy to be part of site specific exhibition Parter in Ústí nad labem. I contributred with short audioplay/walk which is based on a history of Ústí and  space around the gallery.

“The basic idea of the exhibition is to increase awareness of the scope and meaning of specific public space — parter, elevated area of Masarykova Street in relation to art, architecture and landscape architecture. We are trying to start interdisciplinary dialogue between experts, artists, local politicians and especially the inhabitants of parter, whose future we want to discuss. The stimulus for creating a curatorial project working with public space was direct confrontation with life and events in the new temporary location of Ústí nad Labem House of Arts. Some proposals remain only as ideas and wait for a suitable opportunity and time for implementation in the future, because the attractiveness and quality of this environment is directly dependent on understanding and connecting its past, present and future. The urban space itself is an active form, not just incoherent set under responsibility of various entities and perhaps attempts to negotiate may succeed with a proper story.”

With Iryna Zahladko we created a poetic dialog and earthy performance.

KU (6:52’) is freely inspired by a story about unusual fruit which looks like a fish, flies like a bird and can be found only in Khazaria. This story can be found in a Dictionary of Khazars, book by a famous Serbian writer Milorad Pavic. Film is based on a dialog of two creatures, which are imagining how this fruit is like. It opens questions about their identity, about identity of this mysterious fruit as little animals try to grasp the world around them. // Video was exhibited in Estonia at Gallery Mihhaile, at Famufest exhibition in Prague, screened in San Francisco and Czech republic.

Letter From a Pier

Letter From a Pier (8:04’) is a short experimental esay about memory ano women. Cold autumn in Estonia is becomig a winter, which brings wondering around last year. Film is made from footage filmed using one year. It is a diary film, developed through traveling, loving, getting home, abandoning. Film was screened few times in Prague, at Famufest, in Národní Galerie and at art universities.

Landscape festival TRSY is an international land art/landscape festival aimed at connecting landscape, art and science. It Took place at summer 2016 in Lhotka u Berouna, Czech Republic. The festival consists of two interrelated blocks: an art symposium with international guests and a visitors‘ part of the program. The visitorscan try to make land art of their own during art workshops and attend scientific-artistic talks held by prominent Czech scientists and artists. A collective exhibition was made from artworks created during the festival. Landscape as a public space intended for artistic expression shows that art does not have to be confined to galleries and can be easily accessed by public in an immediate and often unexpected contact.My role in this collaborative projects is Director and Founder.

Water is site specific sound performance, designed for a monastery at Plasy, shown at festival on Architecture and Sound (Agosto Foundation). Monastery itself in build on a water (By famous Architect Santini): that creates necessity of a stable water level – otherwise the foundations rots and monastery falls down. We have performed a ritual of bringing water and visitors was able to hear the sound of it as it was poured into the pond inside one of the buildings. Sound was recorded and transformed into composition dealing with space, motion and surface. It was held as a tribute to water as element of a life in architectonical sense, as the building alike life is based on it. This performace was done in collaboration with Zuzana Sklibova and Matej Senkyrik. 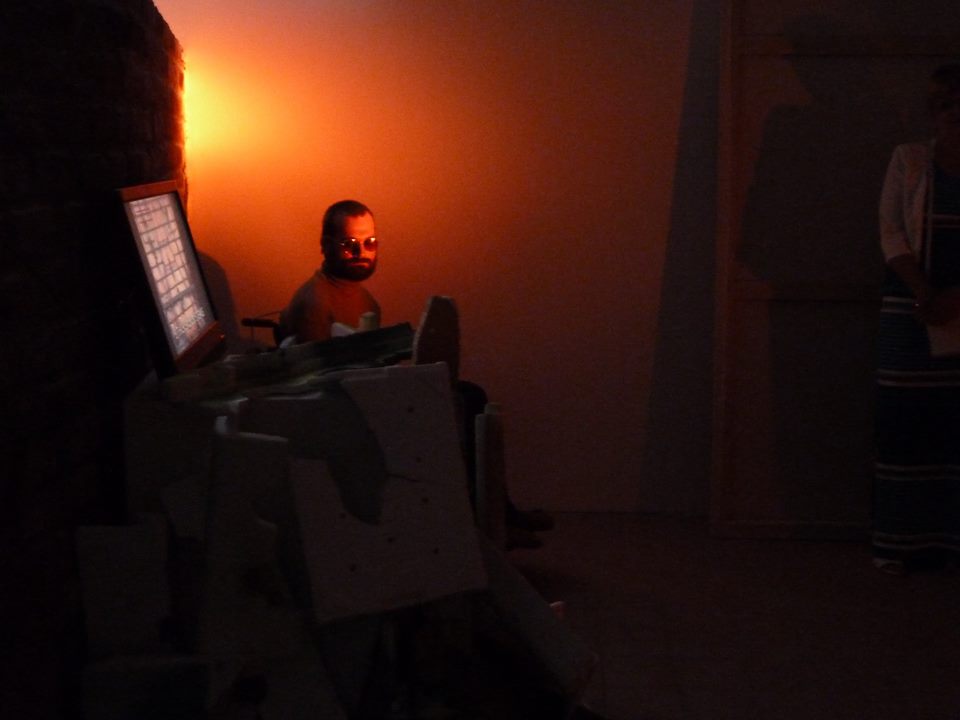 Fin de l‘ere is multimedia theater installation. Topic of a performance rests in repeating situation which is impossible to leave – two partners are discusing their relationship and food. Thetre like performace is placed in a gallery as it is accompanied with videos, sound and scenography. Two actors reapets their dialogue whilst going through differenet stages, acompanied with dim lights, speactors wandering around. Actors are exhausted, angry and ossibility of leaving with digninty is more and more unimaginable.// Performance was done in New Gallery in Prague.

How to Be Efficient and Slow

Happening How to Be Efficient and Slow was held in gallery Plato in Ostrava. It is a meditative event which aims to produce slowness so necessary for contemporary hasten World. Meditation with spectators wasfollowed by meditation held by snails, which brought their slowness and calmness into spacetime. At the End we held a discussion about what was experienced on slownes, calming down amnog others in huge space of a gallery and spectators were offered to adopt a snail who they had spend time with. // It is a collaborative project with Hana Magdonova.

Project The Boy Who Lost Three Things and Found Two Things came from an urge to intervene into nature/space thruogh itself. Different places were recreated without using tools, bringing materials, throwing and leaving garbage. Tese statues are calm remiders of athropocene, age of men, where everything is connected and influenced by humans. Our inspiration comes from Landart movement, but we’ve stayed subtle and on the ground.

Project was exhibited in GAMU

Two personages are wandering around Tallinn in same clothes, they hide their face. Two women are looking into camera. How do you distinguish them? Is it one person, or two? Or Many more. How do you identify yourself?

Sunrises from diﬀerent countries was shown in Dig Gallery in Košice. Sunrises was made by Martn Zet, Vendula Guha, Jiří Matoušek and myself.

KINOLAB is a flm-discussion platorm focused on current socio-politcal issues through flms and subsequent discussions with experts. Our goal is to spark atenton, raise awareness and provoke public discussions thru critcal thinking. Admission to all events is free and accessible to all. We held events in Paralelní Polis in Prague under name Cinema43, in Finland (Pixelache festval) and in DOX (Center for Contemporary Art). I was co-leader of a project and dramaturge.